You are here: Home / Stuff I Like / Why I picked the Seidio Innocase for the htc EVO

Recently, I wrote about How I doubled my htc EVO battery life. Due to the popularity of that post, I decided to follow up a brief story about how already owning a Seidio Innocase II Surface Case for HTC EVO 4G weighed heavily in my decision to find a battery that didn’t change the phone’s profile. 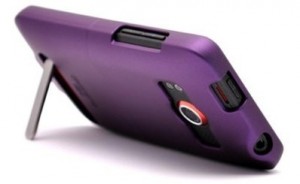 Klutzy = I need a case

For the first few weeks I owned the htc EVO, I went with the no case option. I thought: Why would I want to mess with the sleek look of this new device? Then, after a couple klutzy incidents that almost found my EVO dropping three to four feet to a hard floor, I changed my mind.

The EVO is a work of art if you are into tech toys. I decided I would like to protect the device while not changing the form too much. I shopped at my local Sprint store and a few local electronics stores. I tried at least a dozen cases out before settling on the Seidio Innocase II.

The Seidio Innocase II changes the sleek look of the mobile device very little; yet it provides good protection. I’ve managed to drop the phone a few times in the last nine months and, in each case, it has been undamaged. Obviously, some of that is luck, but the scratches on my case are testament to the fact that it prevented damage to the device.

The case is made of two pieces. The two pieces slide easily onto the phone (one from the top and one from the bottom) to provide protection to all areas of the phone except the screen. I like that the case wraps around the top edge of the phone, protecting the glass edges of the screen which I am fairly sure would have been damaged in one of my drops.

Finally, I like to carry the htc EVO in my pocket and this case slides easily in and out of pants pockets. Unlike rubbery wrap around cases, it doesn’t pick up lint or get stuck being pulled in and out of pockets. The case also keeps the phone elevated in case you were ever to set it on a table or bar that had just been wiped down.

Overall, I rate the Seidio Innocase for the htc EVO 4.5 out of 5 stars. In fairness, the .5 star loss is my own frustration of not waiting to get a cooler color than black.