You are here: Home / blogging / Social media signal and noise

How do you separate the signal (those messages that matter) from all the noise that exists in the social media universe? Without a strategy and some tactics to back it up, it’s very easy to get lost in the noise. I’m not saying the noise isn’t interesting and even fun. Instead I’m personally concerned with how productive I can be when the noise overshadows the signal. 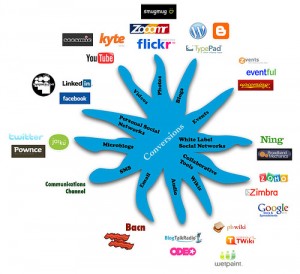 Filtering strategies to find the signal

The idea of filtering signal from noise was originally presented to me by Phil Gerbyshak almost a year ago. It’s one of the best pieces of advice I have received and followed up on to make social media more manageable.

Filtering Twitter for signal vs noise. When I met Phil I was following less than 500 people on Twitter. Still a pretty manageable number to monitor in a single stream. At the time Phil was following thousands. He provided two pearls of wisdom. First, use Twitter lists to make sure you see what those people important to you are saying. Second, Never go back. He’s right, the important message will be re-tweeted by your network. Twitter is not something you “catch up” on. It’s now, it’s real-time. Today, I have several lists and I almost never go back in the stream.

Which social proof matters? I recently read Mitch Joel’s Experience has nothing to do with your social media status and was intrigued by his final sentence.

“The trick is in not thinking that someone with many followers or lots of Blog posts with comments is a seasoned professional. They may not be.”

Mitch is of course correct. I, however, thought to myself or “they may be.” A perfect example is Mitch himself or his fellow A-List blogger Chris Brogan. These gentlemen have lots of followers on Twitter and lots of comments on their blog posts for a reason. They walk the walk, so when they talk the talk people listen. The trick is in being sure the following is authentic and the comments are real and not from a bloggers network. If every post is commented upon by the same five people you may want to think about what that could mean.

Do your part. My RSS reader is full of great content as I’m selective about which blogs I follow. Even then, if I miss reading for even a few days there are hundreds of articles to scan. Then I need to decide which ones to read. I strive to share carefully. I share no more than a dozen articles in my RSS feed each day. Then, I share no more than three or four of those articles via Twitter. These are the best of the best as I see it. So, if you trust my judgement I can be part of your filter. I know when Phil takes time to share an article in my RSS feed I make sure to at least skim it.

Your turn, how do you filter the great from the good each day?