You are here: Home / motivation / Snapping a chalk line 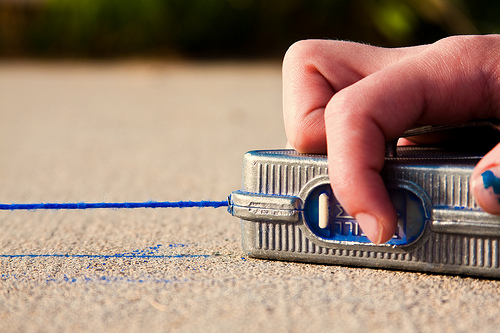 Wrapping up a project or software release can be a real challenge. For almost fifteen years now my business partner and I have referred to the process as “snapping chalk lines.” If you are carpenter or home improvement buff you’ll know we are referring to the chalk lines you “snap” to mark where walls will go. At some point or another you have to convert the blueprint into a finished basement. That process begins when you start snapping the chalk lines. Designing is done and building has begun.

Decide on the final features for a software release. Then, that’s it – no more saying, “let’s squeeze one more feature in.” One sure way to introduce bugs into a project is with the unintended consequences of last minute (typically not well thought out) feature additions.

Settling on a feature set results in finite number of tasks to complete before the project is shippable. This process starts when you snap the chalk line. There is always room for incremental releases between significant versions. Save that list of features for you next incremental release.

Deciding on your chalk lines

If you are listening, your customers will decide on the chalk lines for you. Here’s a few of the projects I’m snapping chalk lines on right now. Well, the ones I can talk about at least.

What chalk lines will you be snapping in 2011?