You are here: Home / she said he said / Jim's social media strategy: I swear sometimes 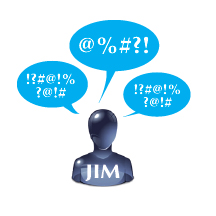 Yesterday, Shelby had her say with “My social media strategy: I swear I don’t swear.” Today it’s my turn. If you read this blog regularly none of this information should com as any surprise. I’ve just compiled many of the thoughts I have about social media into an actual strategy. Shelby gets thanks for that. As I often say, writing is the doing part of thinking.

Let’s get this whole swearing thing out of the way right off the bat. Yes, I swear on Twitter, Facebook and even on this blog sometimes. Do I think it’s okay? Not really. I once heard it said that people who swear need to improve their vocabulary. I’m working on it. I’ve already limited myself to damn and hell on this blog. On Twitter and Facebook, I now try to avoid the F-bomb but will sometimes let an occasional poop slip through (well, the version of that word that starts with “s” and ends with “hit”).

I’m also not afraid to broach the subject of politics. I know, I know. Don’t go there, Jim. Here’s the thing: Our beliefs are part of who we are. That’s where the passion resides. Just today, I did a little experiment on Twitter and Facebook. I made a bunch of status updates about goof ball Charlie Sheen. Wow! I received lots and lots of feedback and comments. Really people, that’s what we find interesting: A poor guy going through some pretty significant issues in his life? Let’s chat about issues of substance sometimes. What’s going on in Madison, Wisconsin, affects all of us. There are clearly two or three sides to the issue, and I think it helps us all to understand how the other side thinks and feels.

1. No frontal assaults. Don’t single out one person and go on the attack. No, I’m not going to call you out; at least not in the social space when I can’t see the whites of your eyes. If I know you well enough that we sometimes meet in person, I might ask you then about a certain generalized behavior online and ask if you think it’s beneficial for you to do that. This is, by the way, how Shelby approached me about swearing online.

2. Laugh at and make fun of yourself. I’ve learned to walk away from comments online that set me off. As quickly as I can, I turn them around into a joke and laugh it off. If I can do so by making fun of myself – even better. It’s pretty darn likely that whatever the other person said I have taken out of context and blown out of proportion.

3. Treat others as you would like to be treated. I know it sounds silly and simple, but it works. I’ve stopped using the f-bomb(except that little incident last Friday on Twitter) because I really don’t like reading it in the tweets of my friends. So, if I don’t like seeing it, then it’s pretty likely others don’t as well. It’s just not very gentlemanly or lady-like….seriously, kids.

4. Un-follow/Un-friend at will. Now, I’m not talking about your family here. I mean, my wife Cheryl and I fight sometimes but I don’t un-follow her on Twitter. The same goes for Shelby. If we disagree, she’s getting the benefit of the doubt. Once you get out of my circle of trust …  Yes, sorry you’re one click away from un-follow if we get into it more than a couple times. I’m not getting any younger. I have lots of great work left to do and very little time left for meaningless confrontations with acquaintances.

5. I swear and talk politics. – Oh, and I believe in God and am not afraid to say so. So, this is the anti-strategy statement: I’d like to stop doing all three. I’m just not sure if my wildly independent “don’t tell me what to do” streak will let me. Honestly, sometimes I just can’t help myself.

That’s my take, Shelby. See? You are wearing off on me. 🙂