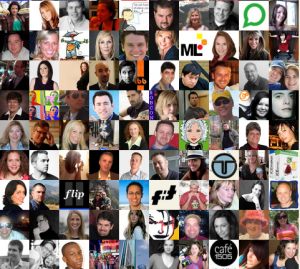 Twitter is just talking and Scott Stratten reminded us of that recently, at the #unGeeked conference. I conduct myself the same way on Twitter, Facebook and LinkedIn as I do in face to face communications. Notice I didn’t say in real life (IRL) because I feel all the social media platforms are real and make up human networking 2.0.

Human networking 2.0 is the confluence of the on-line and off-line worlds. The Translator (great blog) team and specifically Mark Fairbanks have me thinking a lot about how the on-line and off-line worlds meet. Consider, I’m typing this while sitting with the Translator team during their lab hours. The conversations go way beyond a 140 characters but are no more or less real than what happens on-line.

Anywhen becomes possible because of human networking 2.0. By being able to have conversations that transcend time and space using tools like Google Wave (finally out of beta and anyone with a Google account can now use) we extend the power of communication, not limit it. I’m working on a project now that spans time zones even when we are all at home. Google Wave keeps it moving.

Job hunting and hiring change too. Today I had coffee with a friend who starts a new job in a few days. She found the job via Twitter. Yes, really. A few DM’s, cups of coffee and a peek at her LinkedIn profile(by the employer) later and she has a job. It was that simple because by looking at her Twitter stream the employer already knew about her.

What you do on-line is real. Human Networking 2.0 will only continue to grow. The other end of a Twitter @ message or DM is not a computer or mobile device. No, it’s another human. That’s why our ColorMetrix brand twitter handle does not interact much if at all. We move those conversations to our personal accounts then the person knows they are dealing with a human.

I define my overall networking strategy as human networking 2.0, how do you define yours?