You are here: Home / motivation / How making decisions polarizes your audience 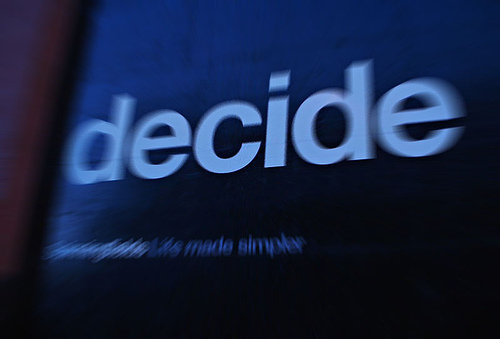 How many of the people around you actually make decisions? I’m not talking about the small decisions like what to wear or what to eat, but the big decisions that matter.

In the White House, we have a president who made some big decisions since he was elected. The Governor of my state  (Wisconsin) has also made big decisions since his election last year. These two men couldn’t be more politically divided; but it’s hard to argue they have not both been agents of change. Change was driven by making decisions.

It’s also safe to say approximately half the folks approve or disapprove of the two men above. Making decisions that drive change will polarize those who look to you for leadership, advice and guidance. As far as I can tell, both these men are true believers.

The way to gather raving fans is not to try and please everyone. It can’t be done. Make decisions that drive change you believe in. There will be haters. It’s almost inevitable. The thing is you’ll be making forward progress. You’ll be driving a dream.

Of course, it sounds harsh. Think about Bill Gates, Steve Jobs or Henry Ford. None of these men was/is loved or admired by everyone. Yet, all three drove great change in the world. We are all living those changes today. They didn’t do it to be liked. They did it to follow their dream. They made the decisions necessary to drive the change they believed in.

I started this post with politicians and then moved into business leaders. Now let’s discuss religion. Does the whole world love Jesus, Moses or Muhammad? Of course not; but all three have raving fans. These historical religious figures made lots of decisions to drive the change they believed in.

Writing this post was a decision to drive change. I’m not a fan of wishy-washy people and now you know that. Some of you may stop reading because of the political or religious references, and that’s okay. Others (hopefully more) may like that I’m willing to share this much of myself online. Whatever the outcome, I made a decision to be bold with today’s post.

By the way, making big decisions requires that you realize – really realize – that your actions have consequences. A polarized audience is one of the consequences you can see. It’s also a consequence that really doesn’t matter or slow you down. It’s the unintended consequences that always come back to bite you.