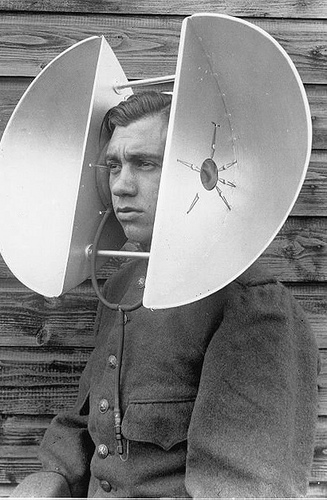 There has been a great deal written about setting up online listing stations in recent years. I’ve set one up myself and have found interesting information about competitors and located prospective speaking engagements. You can listen offline as well it just takes a bit more effort and practice.

You have two ears and one mouth for a reason

I know it’s an old joke but listening at least twice as much as you are speaking is crucial for success in the offline world. For example, if you show up for a “sales call” and end up at the front of a conference room sharing a PowerPoint presentation, how much are you learning about the prospective partner business? Not much, right?

How about if you show up for the same meeting with a notebook, a pen and a list of questions to ask. The goal of course is determine the suitability of working together. You’ll ask questions and then hopefully listen for long periods of time filtering the responses in search of areas you can assist the other party. The quality of your questions will in turn inform the potential partner business that you know and understand the problems of their business. (The questions, of course, will be focused on problems your goods and services provide solutions for.)

The same approach can be applied with existing customers and contacts. Recently, at a conference I was renewing a relationship with a longtime colleague. I had lost track of him for about a year. Seems he had not lost track of me. As we talked he said, “I really like what you are doing on Linkedin.” I see you there and not too much like some people. I don’t share to this to toot my own horn but to illustrate that I had to be listening to hear his comment. The aforementioned comment was buried in a long conversation about how we might work together in the near future.

I made a mental note to write his comment down as soon as I could. Right now I am working hard to improve my effectiveness and usefulness on Linkedin. I recorded the thoughts in a notebook and now almost a month later am thinking about it again. The key was having my offline listening skills tuned to catch his comment. Now, in a quieter moment I can think about ways to improve my Linkedin activity.

Earlier this year I wrote The Help Others Manifesto in which I discussed the success of the five ColorMetrix User Group meetings held in the early 2000’s. Since then I’ve been working on ways to revive the meetings while at the same time listening for interest. I’m spending more times at trade shows and conferences and it’s hard to run into a past attendee who doesn’t rave about the meetings and ask when we are going to do the next one (It’s been more than five years now since the last one).

With this in mind I started a ColorMetrix User Group on Linkedin. Through invitations and word of mouth many of the previous attendees have joined. I’m starting tentative plans for a sixth User Group meeting right before International Sign Expo next April. This meeting will happen because I tuned my offline listening to hear comments about the past meetings.

Opportunity is speaking everywhere as long as you are tuned in to hear it.