That idea you have, try it. Develop a quick plan, with low cost and get a prototype whipped together quickly. 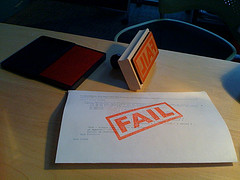 Is fast failure really easier in the software world? I read a story years ago about the first Palm Pilot prototype being carved from wood and carried around by the inventor. He pretended to use the device for all the things he wanted to use it for. That way when the functional prototypes came along all the buttons and stuff had already been thought out.

A friend owns the three letter domain QIP.com. Over the last month or so we have had conversations and exchanged emails trying to find a way to turn this site into a revenue engine. The site generates tens of thousands of direct hit traffic every month (most from eastern European countries). Still, that’s a whole lot of native traffic that we should be able to generate revenue from.

In the 15 years QIP.com has existed it’s been too many things. That’s OK, however, because as of about noon today it became Quick Internet Pages. I had been talking with my friend about how blogging (as part of an overall social media and community strategy) has changed the way I do business. Over coffee a few weeks ago in California I told the whole story and he said why not turn QIP.com into a blog about that with ads to generate revenue.

My friend Pat and I have worked on several projects over the last 15 years. While none have made us rich all have managed to break even or even make a few bucks. Along the way we’ve both learned a lot about business in general and the internet specifically.

Time to tear a page from Brian Clark and Chris Brogan’s playbook and just start telling the story. That’s what QIP.com will be. A running story of what it takes along with the tips and tricks necessary to make a blogging platform like WordPress into a revenue engine.

Based upon things Brian and Chris has said over in Third Tribe Marketing we will be looking for guest bloggers and business opportunities to share on the site. If you are interested let me know, I have two eyes, two ears and one mouth for a reason. Your turn.