You are here: Home / Marketer / Airlines and Web Servers

I’m flying again today. Not such a strange occurrence for me but today I’m flying on an old hub and spoke airline. This route used to be Northwest but is now Delta so that’s sort of new but what’s really changed? Not much. 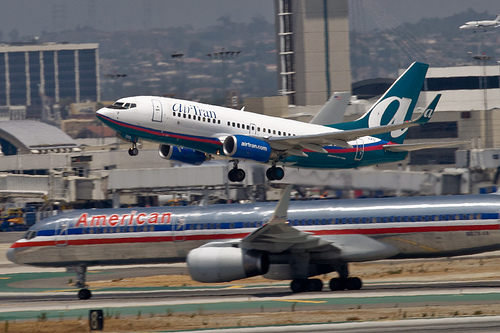 I boarded a plane in Milwaukee to fly through Detroit (and change planes) to get to my final destination of St. Louis. Not very efficient. However, when combined with the other flights I need to make this week, it is financially efficient.

I’m thinking about how this compares with my preferred airline Airtran (soon to be part of Southwest). Airtran does not fly nearly as many places as Delta. I can, however, get to far more places via direct flights from Milwaukee on Airtran. Airtran and Southwest have built networks of what I hesitantly call mini-hubs. Instead of huge concentrated hubs they have many hubs that are not as large.

To some extent this reminds me of computer networks. Consider the logistics of a large dedicated physical server. It’s going to sit in one place. It’s costly to startup and relatively difficult to change or move. A bit like Delta’s Detroit hub.

See how as different as airlines and web servers appear on the surface they really have a great deal in common? Are there any examples like this that you have seen and would like to share?