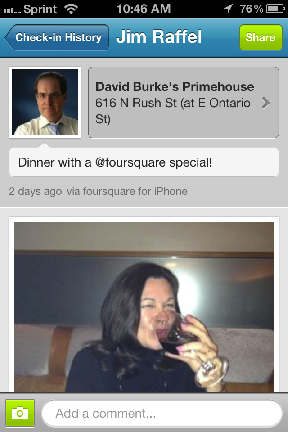 While this is the first time social media is the topic, it’s not the first time I’ve written about David Burke’s Primehouse restaurant in Chicago. The first time I dined there almost three and a half years ago, the group I was with got to visit The Himalayan Salt Room where the steaks are aged. Then, last summer I was blown away by our waiter who reminded me how to succeed by taking control of the customer experience. Today’s post does have a social media component, but is once again about the value of an awesome customer experience.

As our waiter, Brian, greeted us, I showed him my iPhone to confirm that we could get a free appetizer with my Foursquare checkin. Before even seeing the phone, he waved me off and said, “No worries, I believe you but I do have a question for you.” He went on to ask if I was Foursquare guy. I looked at him and, using a line stolen from my friend Shelby Sapusek, responded with “Eh, not really.” My wife immediately corrected me and let him know that I’m actually checkin crazy sometimes. So began a five minute conversation about Foursquare, Twitter, and the general use of social media in the restaurant business.

Social media and the hospitality industry

Primehouse is located in The James hotel and Brian informed us that much of their social media use stems from the folks at The James encouraging them to get on board. Brian was wondering if the Foursquare special had played any role in us choosing Primehouse for dinner on this particular evening. The truth is it had not, but I did share a story about how Foursquare had helped me return to another Chicago favorite restaurant earlier in the day for lunch.

Earlier that day, I sat in my room trying to decide where to go for lunch. I was about to fire up the OpenTable app on my iPhone when I remembered the new-ish “Explore” feature in Foursquare. So I took a look at what was close by using the feature and found that Heaven on Seven was only a couple blocks from the hotel. I’d eaten at Heaven on Seven before but it was Foursquare that reminded me how close I was and got me in there for lunch. If that’s not social media working to help a restaurant increase sales, I don’t know what is.

Social media helped Primehouse this night as well. The picture with this post was shared on Foursquare and by extension with my 4000+ Twitter followers since I also shared the checkin on Twitter. In addition, there is now this blog post to go with the previous two. While I’ve written about other restaurants, seldom have I written about any of them more than once.

This post isn’t about a Foursquare checkin that earned us a free $15 appetizer. It’s about creating a customer experience that has your patrons always feeling both welcome and special when they choose to do business with you. David Burke’s Primehouse has succeeded at this three times in a row over three and a half years. That, my friends, is no accident.